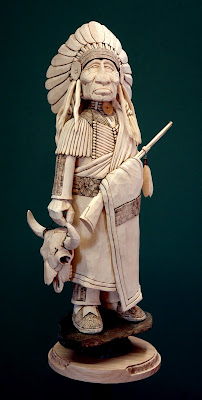 Not only is the carving part of this project finished but he also received his name.  I picked it as the rock he mounted on is full of some kind of metal as it totally destroyed a Fordom bit when I leveled the areas of the rock where he's standing.  Sparks were flying.

I'm really satisfied with this one as once he's painted I think he will be a classic and an example of my best work.  And you'right....that skull really sets the piece off.  Will have to put that on my video list as a number of you expressed an interest in carving one.

He's an impressive piece, standing 20" including the base.  The stone also gives his some heft which will surprise anyone picking him up.  I omitted the fluffy feathers that are normally at the base of each feather but that is okay as in researching I came across a number of war bonnets which didn't have them.  Oh....and do a Google image search of "war bonnet" and see who's dominating the web these days!!!

Anway, some more photos in the gallery and your comments are always welcome and appreciated.
Posted by Lynn O. Doughty at 2/29/2012 03:36:00 PM 6 comments: Links to this post

Thought you might see what I'm working on besides that Buffalo Soldier.  This ought to be a really nice piece once it's fleshed out.  The arm is attached using the paper method so I can remove it later and paint the beaded blanket strip.  I really like the skull...spent the who afternoon on it yesterday and even went over to the Gallery and brought over the real one hanging there to make sure I got the detail right.  The rifle is a Henry Yellow Boy but you'd never know it as the lever action is hidden by the blanket.  His chest will be covered with a breastplate and there will be lots of beading on his shirt, leggings and moccasins.   The mount is a piece of stone I picked up in South Dakota a couple years ago and to get it level for the wooden base I used some Bondo which I'll paint.
-
Hope you like him.  One more photo in the Gallery.
Posted by Lynn O. Doughty at 2/23/2012 04:34:00 PM 5 comments: Links to this post

Cutting it just a little too thin!

Well, it’s hair and a hat trick for this segment. 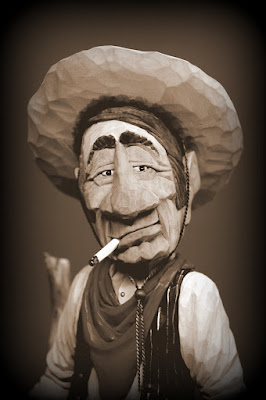 Here's my new pal Montana!  He's from Charlie Russell country and I used Charlie's paintings as a guide to both carve and paint him.  I took a little liberty in photographing him so if you want to see him in color just go to the album in the Gallery.

Opps!   Only the last 6 minutes were originally posted!  Sorry!  Still trying to figure out all these new changes.   Here is the complete version.   Still a MPEG4.

This video segment was uploaded using MPEG4 vs. the AVI format I was using earlier.  For some reason the new computer dropped the DVIX compression option from my video program.  Anyway, I hope it works for you okay.  Although I hate to ask, let me know if there is any problem.

We've been dealing with a major hardware problem over the past few days but after a trip to Joplin and the purchase of a new CPU we should be back in operation today.   What a bummer!
Posted by Lynn O. Doughty at 2/16/2012 07:19:00 AM 4 comments: Links to this post

I started this series with just a generic cowboy bust in mind but then switched over to a Buffalo Soldier.  Now, after seeing a really nice rendering of that subject I've been thinking of doing a complete figure with lots of details.   This morning, in checking the hit count on my blog, I noted a pretty big spike of individual hits.  To me that indicates there is a lot of interest in this video series but it doesn't tell me whether it's for the bust or the full figure.  So.....how about a little poll to see which is more popular?  If you want the bust I'll stick with that and put off the full figure till some time later.  Just let me know. 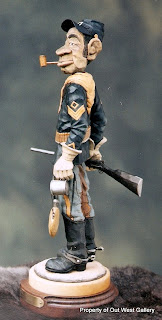 Still refining the head.  In this one we do the nose and the mouth.

I’ve decided to carve a bust of a  Buffalo Soldier for this series.  As figures of Blacks are few and far between it should be a good challenge.  In this part we change our generic cowboy head into the shape we can use for our soldier.   Hopefully, my comments about the various features of Blacks and their difference from other races will not result in Al Sharpton nor Jesse Jackson showing up at my shop door complaining about my being racist.   Just in case I’d better hide those white sheets I keep around to cover works in process!

Now, I’m not ruling out not actually doing that kind someday but right now I thought I’d show you how I go about laying out a simple Old West style bust, transferring it to a piece of wood and then cutting it out the easy way.   All the patterns are in the Gallery album so let’s get started!

Well, I put his watch in his vest pocket so he's ready for his debut!  I really like this one.  As I mentioned earlier, he's about 16" tall without the base so you can't miss him.  Also, using an old style shirt front instead of the usual neckerchief really takes him in a completely different direction than my normal cowboy figures.  I could have made him a lot more rough and dirty looking but I think a point is reached where such things start to detract from the figure as much as they add to it.  I did put a dribble of tobacco juice on his dicky so that should be enough.
-
I've used my Turkey Brand flour sack before and as it's always been a crowd pleasure thought I'd do it again.  It's all done freehand with a square tipped brush for the lettering and just a small brush for the turkey.

There are quite a few photos in the associated album so check him out and let me know what you think.  Always appreciate your comments.
Posted by Lynn O. Doughty at 2/05/2012 11:24:00 AM 3 comments: Links to this post