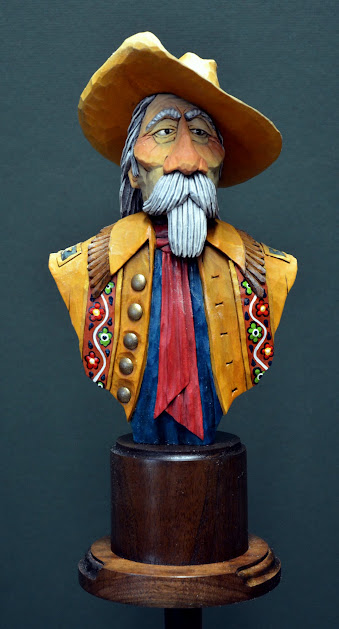 Put the final brush strokes to this one yesterday and considering my constant squinting he turned out pretty nice.  There are more photos in the Gallery section and will look forward to your comments.
Posted by Lynn O. Doughty at 8/24/2015 08:58:00 AM 11 comments: Links to this post 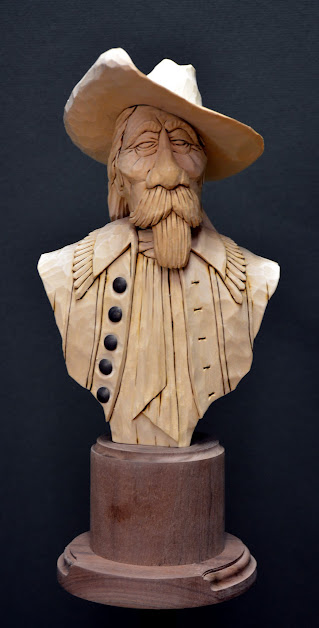 Buffalo Bill Cody is one of my heroes in American History.  Truly a remarkable man.  In his time he was without a doubt the most famous man in the world.  If you ever get the chance to visit the Cody Museum in Cody, Wyoming should take it as it is one of the best western collections around.  And of course you can stay at the Irma Hotel and sample their fantastic buffet, almost worth the trip itself!

I've done quite a few busts of Buffalo Bill over the years but in this one I tried to be a little more realistic.  This one is about 12" tall with the walnut base and should be a winner once painted.  There are a few more photos in the Gallery and your comments are always welcome.
Posted by Lynn O. Doughty at 8/21/2015 07:12:00 AM 2 comments: Links to this post 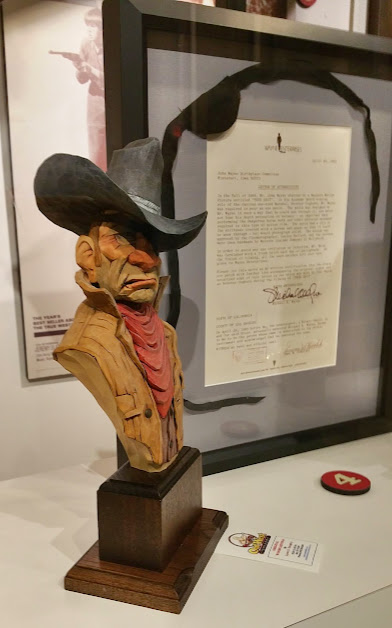 We handed over my carving of "Rooster" to the new John Wayne Museum this past Tuesday.  They were quite excited about receiving it and placed it in the "True Grit" display case right next to the eyepatch John Wayne wore when filming the movie.  Funny...when I mentioned that Judy and I had seen one at the Autry museum in California I was told that Wayne insisted on a new patch each day of filming.  Also in the case were the jacket he wore along with his pistol and a commemorative carbine.  Harry Jackson's bronze of Rooster was also setting close by. (Years ago Judy and I took a tour of Jackson's studio in Cody, Wyoming.) Our Rooster fit right in and the weathered colors I used really matched the overall look.  The Museum will be publishing a newsletter soon about the presentation and I will post it once received.

When I was honored a few years back to have some of my larger scenes included in the permanent collection of the Woolaroc Museum here in Oklahoma I thought that it was the crowning moment of my carving career.  While it certainly is a high mark I feel that this one measures right up there with it.  Seeing that little bust of mine in among the other memorabilia of that great star and American makes me feel quite humble and truely honored.  What a thrill.

I have posted some other photos of our trip to Winterset, Iowa in the Gallery should you like to see them.  As you can see by the photo of Brian Downes, the museum's Director, Judy and our cousin Carl Heinrich, standing in front of the house where Wayne was born,  it was a perfect day all round.
Posted by Lynn O. Doughty at 8/13/2015 10:12:00 AM 8 comments: Links to this post 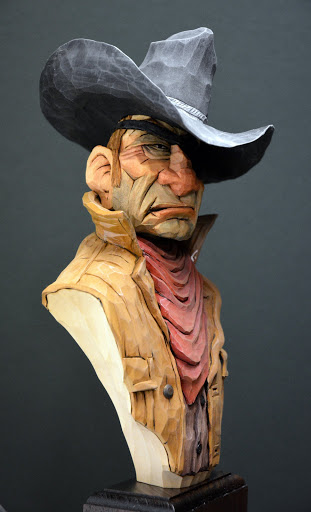 This has got to be one of the best I've done so it certainly deserves the "Classic" designation as an example of my best work.   I had a little doubt about the collar but it turned out that that was one of the easiest parts to carve.  I did reinforce the tips with some super glue for a little bit of extra protection.  The painting was also quite easy and, like The Searcher, I used a lot of dry brushing to create a well worn effect.    When mounting it to the base I turned it to emphasize the eye patch...maybe just a little bit too much but when I took the photos this morning and viewed the one showing his right side I think it was the right decision.

This one will be my choice to offer the museum as it's in the caricature genre and therefore more representative of my work.  Whichever one they prefer...The Searcher or Rooster, the other is already spoken for and will reside in a collection with a few of his buddies.

There are more photos in the Gallery and I will look forward to and encourage your comments as I really appreciate you views of my work .... both positive and negative.
Posted by Lynn O. Doughty at 8/06/2015 07:15:00 AM 5 comments: Links to this post

I think I have a new submission for the John Wayne museum to consider.  While "The Searcher" was nice I think this one, once painted, will be the real standout.  There are several more photos in the Gallery and I can't wait to paint him.