Making A Base For Your Carving!

Just as a picture or photograph needs a frame to make it look good, a carving needs a base to really set it apart. The following steps will show you how I go about making a simple base for one of my figures. Although it might look a little complicated at first after you do it a couple of times it's really a snap to do. I hope it's helpful to you.
Posted by Lynn O. Doughty at 11/28/2006 12:09:00 PM 3 comments: Links to this post 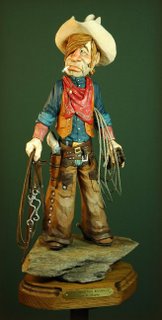 Here is my latest piece. I had hoped to get him completed before the woodcarving show in Dayton, Ohio but it was not to be. I'll post the painted photos once I get back.

He is mounted on a piece of the Rockies that my wife and I picked up while on a drive through the Rocky Mountain National Park this past September. I drilled the mounting holes into the rock with a carbide bit and he will be epoxied in place once he's painted.

To get the lasso under his left arm I did the arm as a separate piece, carved a notch for the rope and then epoxied and glued everything in place. Once everything had dried I carved the epoxy that had squeezed out to match the wooden surface. A nice looking effect. He's holding his gloves in the left hand and in the right his mounts bit, headstall and reins. Once he's painted the rock should really stand out.

I did forget a small item on this piece and if someone guesses it I'll confess what is missing. Otherwise, it will remain unknown. Let's see how sharp your observation is. (No...it's not the buttons on his vest or shirt...I'll paint those on later.)

Update: Here's the piece completed. He turned out pretty nice but I'm not completely happy with his pose. He could have appeared a lot more relaxed if his arms were hanging not so far forward. While arms have a natural bend at the elbow when hanging relaxed at the side they don't project forward as much as they do in this piece. Oh well.....it's a learning process so I'll remember this when doing any future pieces.

The part that I forgot has been added on as his gun would be useless with out some bullets.

More photos in the gallery.