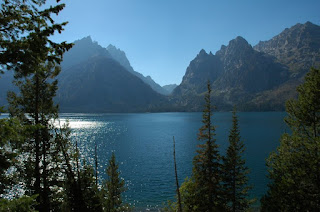 As I said in the last post, we were heading for Montana. On the way we spent some time in the Grand Teton area. Like the title says, "What A Country!" I'd love to live in this area but if I did I would probably take it for granted after a while so it's probably best to only visit it every couple of years to remind myself that it's still there and as beautiful as ever. One thing we did note is that Jackson Hole is turning into another tourist trap. Reminded me of Branson, Missouri. Too bad.

We'll be back home in a week or so and I promise I'll get back to that horse project. However, right now we're on our way to the C.M.Russell Museum so that horse will just have to wait.
Posted by Lynn O. Doughty at 9/16/2007 09:07:00 AM 5 comments: Links to this post

Carving a Cowboy's Horse-Part 1-The Body! 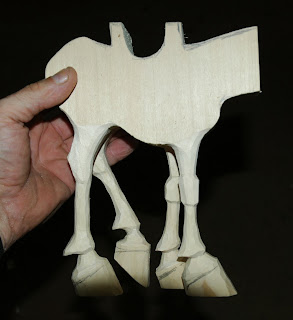 My friend Dave out in Arizona has been after me to finish up the horse project so I guess I'd better do it so it's safe to go out west.

First off, if you are not completely familiar with your bandsaw ...
DO NOT ATTEMPT THIS PROJECT!! We are going to be cutting a large piece of thick wood and stability while cutting will be an issue. A person familiar and experienced with his or her saw should have no problem but if you're not DON"T DO IT! I would hate to have someone get hurt. Now that I've probably scared you to the point of passing up on this project let's continue.

I use a Sears 12" bandsaw which has a cutting capacity of about 8-1/2" inches so I will have no problem. There is no reason you can't reduce the size of the drawing to accommodate a smaller saw. I use a 3/16" blade with 4 teeth per inch. This is called a skip-tooth blade as normally there would be about 8tpi. Working at the scale of this horse this blade will let me make just about every turn I need to and that skip-tooth blade really eats the wood. This is the only blade I ever use.

When I first started carving one of the obstacles I ran into when carving horses was the areas between the legs. Through little experimentation I came up with this method which just about does away with this problem completely. Being able to seperate the two halves gives you access to the inside of the leg and makes carving a snap. Also, it lessens the possibility of breaking off a leg. In this project the only fragile thing is the resting leg so watch out for that when you work around that area. Don't sand the area between the two halves as they now match perfectly due to the path of the blade. They are also nice and rough which will make a very strong glue joint. Properly glued no one will ever know that your horse had some major surgery.

Before I knew much about horses I always thought they had that one rear leg cocked in the ready position in case someone happened to walk too close behind them. That isn't the case at all. When they stand like that they're resting. Watch one long enough and he will shift his weight to the other leg. As the front legs support the majority of a horses weight he will shift the load back there from side to side as long as he's standing in one place.

I know, you're probably wondering where the tail is. Well, like the head, we will add it later. If we made it part of the main block it would become a problem and I don't like problems! We will attach it in such a way that it will be stronger than if it were part of the original block.

One more thing......This horse is larger in scale than the head we did earlier so if you want to use that head on this body you will have to reduce it accordingly. I'd suggest just doing a new head to match this one. You can hang that other one out the barn door.

So, let's get started. Actually, you're going to have to work without me as the wife and I are heading to Montana for some Rocky Mountain Trail Riding. We'll be back in a week or so. I'll have my laptop with me so if you run into a real problem just drop me a comment and I'll climb down off my cayuse long enough to answer your question. Good luck!

Lots of photos in the Gallery.

"Darn, I Dropped The Remote!"

Even though it's Labor Day I spent the time down at the shop finishing up this little repeat. I did one similar to this several years ago. I had this horse setting on my workbench and couldn't match him up with a cowboy so thought of doing this scene again. It's a copy of a painting by Fred Harmon, the artist who drew Red Ryder called "Waiting on the Boss!" Of course I added a few things to flesh it out a bit and bring it up to date. I have no doubt whatsoever that somewhere down there south of the Oklahoma-Texas there is a outhouse that has a satellite hookup. Unfortunately for the fellow occupied inside it looks like his viewing will be limited cause I can just imagine where that remote fell and I bet he goes down to WalMart and buys a new one before searching too far inside that little room!