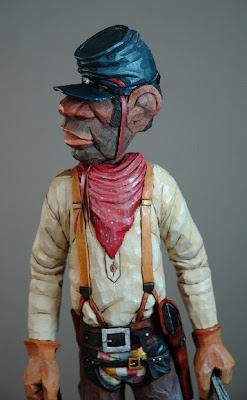 Every once in a great while we a lucky enough to produce something that that seems to be a step above our normal output. "Joshua Deets" is just such a carving. Maybe it was the love I have for the saga of Lonesome Dove and the fantastic and colorful characters that inhabit it. Maybe it was caused by that Black that came up to my table in Dayton and ask if I had any "respectful" carvings of Blacks. Whatever it was, probably a combination of a number of things, it all seemed to "click" with this carving.
-
In doing this piece, I spent a bit longer than normal when applying the colors as I wanted it to look "trail worn". I added lots of tans, light greys and browns into each color to give it a dusty appearance. Personally I think I hit it pretty close.
-
I found this really interesting bit of Texas history on the www.blackcowboys.com website:
-
"In writing Lonesome Dove Larry McMurtry based the character Joshua Deets on a real figure from the old west; Bose Ikard. Bose was born into slavery in Tennessee. When Bose was a young boy, the slave holder took him to Texas still in bondage to work on a cattle Ranch. It was in Texas where Bose learned to ride and rope. Bose got his freedom from slavery and became his own man, He hired out his service to Oliver Loving, Loving was killed fighting against the Comanches. Bose then hired out his service to Charles Goodnight.
-
Goodnight said, "Bose surpassed any man I had in endurance and stamina. There was a dignity, a cleanliness and reliability about him that was wonderful. His behavior was very good in a fight and he was probably the most devoted man to me that I ever knew. I have trusted him farther than any man. He was my banker, my detective, and everything else in Colorado, New Mexico and the other wild country. The nearest and only bank was in Denver, and when we carried money, I gave it to Bose, for a thief would never think of robbing him."
-
Following his work in the cattle drives, Ikard settled in Weatherford (TX). He and his wife Angeline were the parents of six children when he died in 1929 at age 85. Goodnight had a granite marker erected at his grave in Weatherford. On it is inscribed:
-
"Bose Ikard served with me four years on the Goodnight-Loving Trail, never shirked a duty or disobeyed an order, rode with me in many stampedes, participated in three engagements with Comanches, splendid behavior."
-

Joshua Puts His Face On! 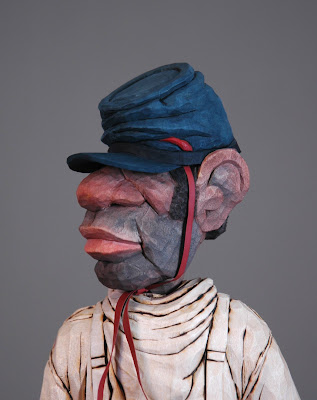 I sat down and painted Joshua's head this afternoon and the result was so neat that I thought I would show him off.
-
I have found the secret to painting a Black character and that's that you don't use any black paint! I used the following colors for his face:
-
-Red Iron Oxide
-Yellow Ochre
-Midnight Blue
-Dark Burnt Umber
-
I mixed up some of the Red and Yellow and then painted the face as I usually do with any character. Once that was done I came back with the Dark Umber to color in the darker areas around the eyes cheeks and chin. Once that was done I used a wash of the Blue for the beard. For the hair I mixed Blue into the Umber to make an almost Black but not Black color for the hair. Finally, I came back and painted in Red highlights on the lips, nose and cheeks.
-
When painting Flesh tones the important thing to remember is that the determining color of flesh, any kind of flesh, is the color of blood. Add a little Yellow Ochre to Red while taking into account the material you're painting on, in this case yellow-tinged Basswood, and you'll end up with a nice warm flesh color. I would never use white except in a case where I wanted a fish-belly looking color for someone who has never been in the sun. About the only cases I can think of for doing that would be the Farmer's Tan a cowboy has when he removes his hat or the creamy toned skin of a Saloon Hooker after she removed his bodice. But we'd better not go there, at least not yet!
-
I made the hat's hurricane strap from a piece of aluminum flashing.
-
A few more photos in the Gallery. 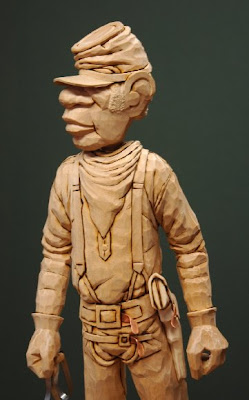 What a great subject to carve! The book Lonesome Dove and it's associated TV series is loaded with material and characters so rich in detail that just saying their names gives me a whiff of cattle herds and trail dust. I thought it would be neat to try and carve some of them and I can't think of a better one to start with than Joshua Deets.
-
In this piece I tried to capture all of his significant features. I decided to give him chaps as he does wear them in the series and I will still be able to show the quilted material that his pants were made of. He will be holding a lasso in the empty hand so it should make a pretty striking figure. Also, it's kind of large, standing about 16" not counting the base.
-
Hope you like him. Lots of photos in the Gallery.
Posted by Lynn O. Doughty at 2/16/2008 03:12:00 PM 5 comments: Links to this post 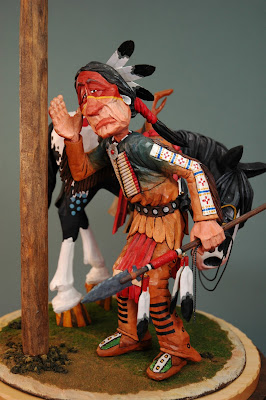 All that paint finally dried so here is the carving all finished. If you compare the photos here with those on the "First Look" post you'll note that the telegraph pole was lengthened quite a bit. I did this because the first pole was just too short. It would have made the carving a little easier to handle or set on a shelf but to keep it realistic the change just had to be made.
-
The little birds on the wire worked out real well. Hopefully you can see the little lady bug I added on top of the pole. I made that out of just a small drop of epoxy painted orange with a few black dots. Everyone who has seen this piece thinks that is the most interesting part. Funny....you spend all that time on something and they go for the smallest little bug.
-
Lots of photos in the gallery section.
Posted by Lynn O. Doughty at 2/13/2008 10:41:00 AM 2 comments: Links to this post Here is my newest piece titled "Distant Drums". It portrays a Indian Brave far out on the plains with his ear to a newly installed telegraph pole. With the sounds clicking through the wire above his head you could just imagine the feelings of wonderment and aprehension he was having. I swear I saw a painting similar to this by either Russell or Remington but just can't track it down. Once it's painted it really should be an interesting and attractive scene.
-
I added the birds on the wire for two reason...the first being as they will keep someone from poking their eye out should they get in close to examine some detail. The second was that it should make the scene much more appealing. Little critters always seem to do that. If you look at the bird on the left he seems to be looking directly at the pole. He is and in the finished piece there will be a little lady bug there. Might as well bring in an insect. Now if I can maybe put a Horney Toad on the ground I will have all the bases covered. The head of the lance is made from pounded brass and tied on. I could have carved this but it would have been just too fragile. In the detail photos in the gallery you will see the arm to body joins which are pretty evident due to the different color of the wood. I mention this as I want you to notice how I make the body flow into the arm. When you attach limbs you have to be careful to do this or the piece will just look like it's been glued on. Once the figure is painted that color variation will disappear as will the joint.
-
So, now comes the fun part of applying paint. I have a feeling this project will take a lot of it.