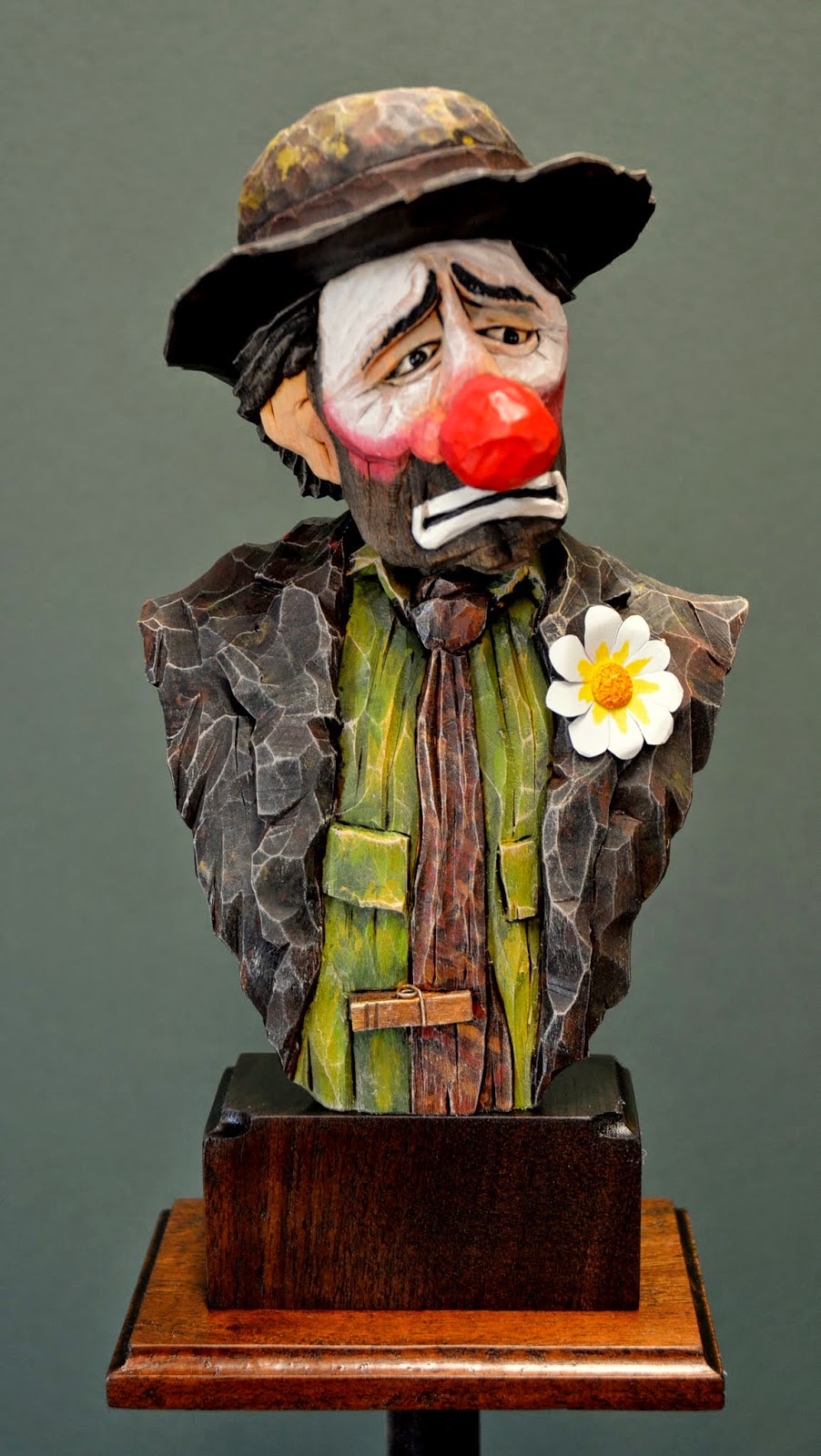 Here's my contribution to the "Silent Auction" portion of the Artistry in Wood show in Dayton, Ohio beginning on November 8.  The Dayton group use this event to raise money for their charities and group.  This years theme was characters related to a Circus.   My first thought when thinking about the Big Top was the clown character created by Emmet Kelly.  I can certainly remember him growing up.  Anyway, I hope it sells for a nice sum so the Dayton club can benefit from it.   Hope you like it too.  You might even want to see if they take phone in bids!!
Posted by Lynn O. Doughty at 10/26/2014 11:02:00 AM 12 comments:

"You've Got To Be Kidding!" 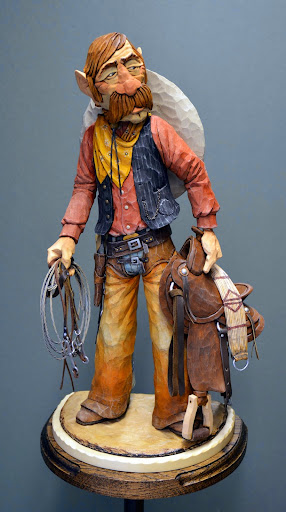 Well, here it is.  This piece has been occupying my time for the past couple of months.  Not that it took me that long to complete.  Doing some of these projects gets me so involved with details that the entire project grinds to a halt while I try to figure out just how to do things.  I will say I think it turned out really well.  I wanted to convey the thought of a cowboy facing his assigned mount for the day.  It's clear from the title that his day is starting off on a bad note.  Oh.....one thing about titles...I've noted that people passing our display or visiting the Gallery almost never look at the title of a piece.  To me that's a real shame as it's the title that explains the piece.  Sure, sometimes the action will do that but not always.  On my pieces and no doubt the pieces of others, that title conveys just what I or they were thinking as we created them.  So, the next time you pass a carving or sculpture you admire take a moment and read the nameplate to see exactly what the artist is trying to show and say.

This is a large piece, standing about 16" with the base.  I spent about as much time on the saddle as I did the figure as I wanted to get it right.  I have an old antique saddle in the Gallery which I brought over to use as a reference to ensure that all the details were correct.  There is one very small piece missing but I won't tell you what it is.  If you're familiar with saddles you can probably figure that one out.  Hopefully, you won't find another.  I made the cinch out of a piece of tupelo which I steamed and bent over the seat.  The rear cinch is made from leather as it was just too small to make from wood and stand up to the handling that it would face over time.  Besides...it looks good swinging free back there.  The cinch straps and ties are also leather as is the bridle and reins in his other hand.  The horses bit is made from copper and the lariat from twisted wire.

I spent a longer time painting on this piece as I wanted the colors to show a larger degree of wear.  I think the chaps are really a work unto themselves and I'm proud of the job I did there.  It might not show but there are lots of layers in the coloring. I wanted a red shirt but settled for a rusty color to dilute it enough so it wouldn't overpower the rest of the piece.  It balanced out just right.  Looking at the entire piece all the colors work well together and have a washed out look to them as if they've been worn for quite a while and still carry a little of the prairie dust.  Neat.

This will be my main piece at the upcoming show in Dayton.  I've ordered a rotating turntable which I hope gets here in time so the carving can be seen completely as the viewers pass by.  Hopefully, one of them will have a few extra greenbacks in their wallet and want to take it home.  Make that a lot of extra greenbacks!! 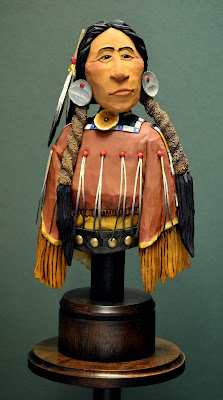 First, my apologies to Mr. David Lemon for using his sculpture "Sweet Grass" as a reference for this figure. About two years ago Judy and I made a trip to Ennis, Montana to meet David and to pick up "Sweet Grass", our first bronze. As you can see from the photo it's one of the most beautiful and impressive pieces of art we've come across. We think that David is one of the most talented sculptors working today. What's really great about him is his willingness to share his talents and secrets with the rest of us through his Blog. If you like sculpture, as I'm sure most of you reading this do, you owe it to yourself to spend some time watching him create his fantastic pieces.

As for this figure, doing a realistic piece has always interested me and one of these days I'm going to complete one. Unfortunately, I'm not there yet. While I think I have the clothing details down to a point that I'm satisfied with it's the facial features that still elude me. But I think I know which areas I need to work on. Like everything associated with this craft it takes a lot of practice to get to where you want to go.

There are more photos in the Gallery and I look forward to your
comments. - Here is David Lemon's "Sweet Grass" a the link to his Blog:

All Hat, No Cattle!

The title might be familiar but the character is new. Not much to say about this one other than I did a little different application of the neckerchief. The busts I'm doing now are a bit larger than most...standing about 11" tall with the base. I think they make a much more pleasing presentation. Hope you like him.
Posted by Lynn O. Doughty at 10/24/2014 06:13:00 AM 3 comments:

I had originally planned on this as a full figure but after doing a Bottle Stopper and a smaller bust of the same subject I was burnt out on the character. To get him off the work bench I decided to finish him as a larger sized bust. Of course it's Jack Palance in the guise of Mr. Wilson, the gunfighter hired to clean out the nesters in the movie Shane. I think he'll be more easily identified once he's painted. Hope you like him even though he doesn't deserve it.
Posted by Lynn O. Doughty at 10/24/2014 06:08:00 AM 1 comment:

Dayton Demo-Burning & Sanding from Out West Woodcarving Videos on Vimeo. 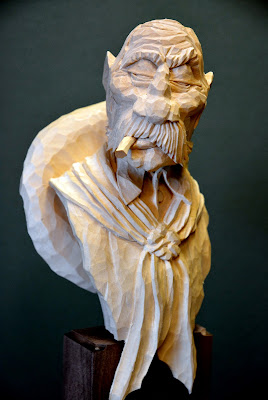 Last year I was ask by the Dayton Woodcarving group if I would do another demonstration. I had done one years ago on carving a horse that was received pretty well so I agreed to do another. As I'm continually asked about painting I thought a good subject of it would be how I go about painting a figure once it's carved. The photo to the left is the figure I'll attempt to do. I choose a bust as ther is just no way I could do a complete figure in the allotted time. This is a good sized piece..about 12" including the base so it should be easy to see just what I'm doing...at least I hope so. So, if you're at the show I hope you pull up a chair and tax my old mind with lots of questions. It will be on Sunday at 1:30 I think. See you there?
Posted by Lynn O. Doughty at 10/10/2014 11:18:00 AM 2 comments: 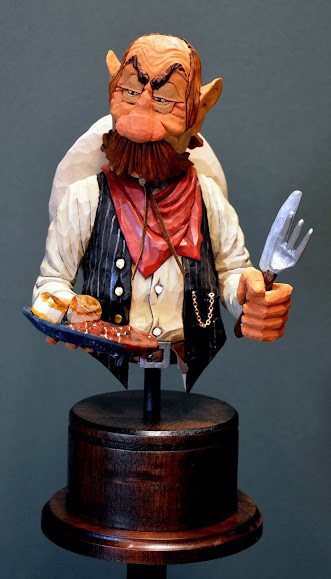 Okay....Here are the final photos of the finished piece. I think it turned out pretty well. Can't really see where I could have made it better. Of course things will start to show up the longer I look at it so I hope it leaves the inventory soon. Like Charlie Russell said..."I raised my kids to leave home!" and I have the same belief. Anway, I hope you enjoyed the trip in making this little gem and should you have any comments I always enjoy reading them. Don't really know whats on tap for the next series but I'll try to think of something interesting.
Posted by Lynn O. Doughty at 10/10/2014 11:04:00 AM 3 comments:

With this video we come to the conclusion of this series. Hope you enjoyed it. I will post the final photos tomorrow.

Where's the Beef - Part 8 - Wrapping Thins Up! from Out West Woodcarving Videos on Vimeo.

Painting Where's the Beef - Part 7 from Out West Woodcarving Videos on Vimeo.


Patterns, videos and/or carving tutorials contained or displayed on this Blog are available to the public for their personal use only. All photographs, patterns, digital media, or recognized techniques of the artist are the sole property of Lynn O. Doughty and are not to be reproduced, copied or otherwise used for commercial purposes in any way without the express permission of the artist. Thank you.