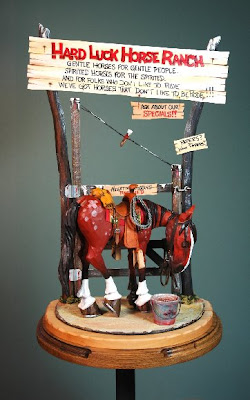 Here is the Hard Luck Horse Ranch completed. It turned out real well. I settled on coloring the horse as a bay with three white socks. One thing you have to remember when painting a horse with colored socks is that if the sock is white the hoof on that leg will be a lighter color than any other leg that does not have a sock. Funny, while just now typing this I remembered that I forgot to add something something.....the chestnuts! Chestnuts appear on the front legs of a horse above the knee, or on the back legs of a horse below the hock. They can be large, or very small. Some people call chestnuts "night eyes." Some scientists believe that chestnuts and ergots may be remnants of the pads that were under the toes of a very early ancestor of the horse. About 50 million years ago the first known ancestor of the horse, Eohippus, had four padded toes on the front legs and three padded toes on the back legs. These horny growths are probably the leftovers from that earlier age. I'll go back tomorrow and put a dark brown spot where they're supposed to be. It's amazing what you can learn while carving a horse.
-
This has been a fun project and I hope you enjoyed following me along as I completed it.
Posted by Lynn O. Doughty at 1/25/2008 03:56:00 PM 2 comments: 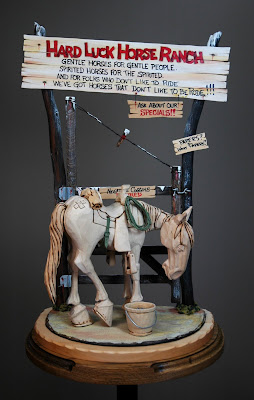 With this post we'll wrap up this little base building project. You'll note I've change the name of the post. I've done a lot of these scenes so this will make this one unique from the others.
-
There are a lot of different steps in this post but none are really that difficult. Probably the most taxing is the sign. I use a fine tipped Sharpie permanent marker to write the small letters. Make sure you give the sign a coat of Testors Dullcoat prior to lettering the sign. This will keep the marker from bleeding into the wood. I painted the sign white on the front surface and then added a little yellow ochre and raw sienna for highlights.
-
I've added a lariet and back cinch to the horses tack. The rope is made from twisted wire and the cinch is made from tin flashing with bent 20 guage wire for the buckles. I really like doing these little details as they add so much to the piece. The same goes for the hindges and gate hooks. Sometimes its a challenge to get them to work out but when they do they're more than worth the effort and believe me.....people notice them.

I'll paint the horse in the next post and then keep this piece a secret till the Kansas City show. It will be my "ringer" for the animal caricature category. 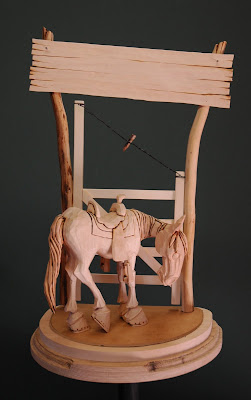 This project will show how I go about making a scene for a cow pony I just finished. I've made this same scene a gazillion times and folks seem to really like it as it sells just as soon as the paint dries. As we just finished carving a horse back in November I won't cover that again. This one is about 3/4 size of the one in the earlier project.
-
While this scene is for a particular theme the steps I take here pretty well match the steps I would take for any scene I might do. Here you will build a ranch gate, set some gate posts, make a ranch sign and then anchor it all together by creating a nice looking set of bases.
-
One of the things that always irritates me when I look at other carvers work is that a lot of them stop without doing what I consider the most important step and that's creating a base or setting for their work. It would be the same thing if you painted a nice picture and then hung it on the wall without a nice frame. You can make a bad painting look really good with a nice frame. The same applies to woodcarving. And no.....I'm not implying that you do bad woodcarvings! You do great work as I've been lucky enough to have seen some of it.
-
This will be a three-parter.
-
Lots of photos in the gallery.
Posted by Lynn O. Doughty at 1/19/2008 03:41:00 PM 1 comment: 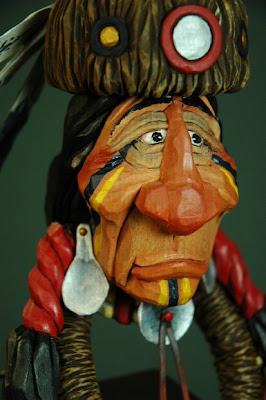 This figure was an experiment in making a Bear Claw Necklace. I have done this type of detail on other full figures so this time I thought it would be a challenge to try something completely different. I guess you could say that I worked backwards, first making the necklace then the base and finally the head and other details. Sometimes this is necessary just to see if the concept will work out. While I did have a close call with the first attempt at mating the head to the necklace after a little overnight thought was able to work the problem out.
-
When I first cut out the blank for the necklace the wife commented that it looked like I was carving a toilet bowl lid. It does sort of look like that. However, once the claws were added and then the head it would be hard to imagine a bathroom fixture somewhere in there. In laying out the necklace I ran the grail of the wood with the length of the piece for strength. It is held to the base by three dowels...two 1/8" dowels on each side and one 1/4" dowel on the bottom. I was a little worried if this would support the weight of the piece but once glued up it's really quite strong.
-
If I were doing it again I would change the eyes a bit. He has sort of a "Deer in the Headlights" look about him which I find a little off from what I was after. Also, I would have liked to have the central hat detail to look more mirror-like but couldn't figure out how to do it. The next time I'm in WalMart I will be scouting out the women's jewelry section to see if I can find something that would allow me to add that detail. Overall I think he looks pretty good and once the name plate added on the bottom of the base he should really sparkle.
-
Lots of photos in the gallery.

War Bonnet - Putting It All Together! 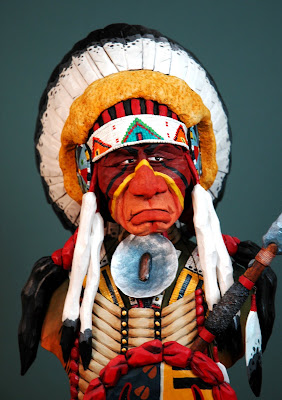 Finally! Boy, for a while there I thought I'd never see the end of this project. But, feeling kind of lonely after taking my little helpers to the Airport for their return home I lit out for the workshop and really applied myself for the past two days.
-
When I first started this piece my goal was to do something that would really catch the viewers attention while also displaying my carving and painting abilities. I know that might sound a little egotistic but I see nothing wrong with that. If we can't be proud of the talents we've been blessed with what's the purpose of having them. Anyway, I think I did a pretty good job.
-
There is one area that I could have improved on and that's the feathers on the headress. If you look at the photo of a real headress you can see that the feathers are really seperated at the ends. While you could probably do this I think the feathers would really be weak and apt to break so that detail can be excused. I would have liked to add the plumed tips but there was just no way I could think of to really do it to where it would look good 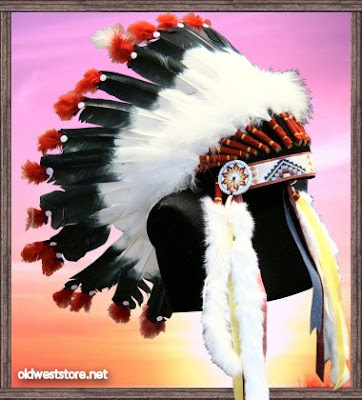 . Other than that I think I came pretty close in reproducing the headress to match the photo.
-
Another detail I wanted to try was to attach some real hair scalplocks to the shoulders of the body. I was going to use real horsehair as we have an abundance of that around here. However, I think that would be just a little too much detail for one piece. Even I, the Prince of Detail, have to limit myself sometimes. But someday on some piece I will try that effect. One little detail I did add was some burnt lines to the edges of the breastplate to simulate the ties of each strip.
-
So, overall I think this little project was a success and I have a vision of a Blue Ribbon in it's future. But even if the judge feels otherwise it's a winner to me and that's what really matters.
-
Lots of photos after the jump to the Gallery.
Posted by Lynn O. Doughty at 1/10/2008 04:07:00 PM 7 comments:

War Bonnet-Part 8- Finishing Up The Head 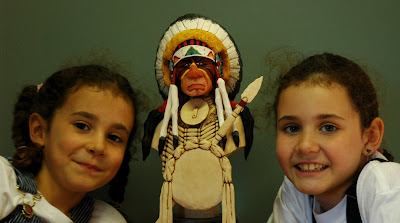 I don't know which I should be more afraid of ..... that guy with all the feathers or those two smiling Leprechauns. That's Miriam on the left and Hannah on the right and they're our Grandkids visiting from Bahrain. They stood on each side of me while I applied the finishing touches to the Warrior's face so if the lines are a little squiggley blame them not me!

In a comment Arnie ask how I was going to hide the glue line down the center of the nose. Well, the steps outlined here take care of half of that problem. The rest will be hidden at the very end of the project.

Do a little research to find some nice beading patterns and carefully paint them on. You can see that just painting the head and bonnet this figure is really starting to sparkle with all the colors we're applying. I can just imagine what he'll look like as the end gets nearer.

Lots of photos after the jump to the Gallery.


Patterns, videos and/or carving tutorials contained or displayed on this Blog are available to the public for their personal use only. All photographs, patterns, digital media, or recognized techniques of the artist are the sole property of Lynn O. Doughty and are not to be reproduced, copied or otherwise used for commercial purposes in any way without the express permission of the artist. Thank you.